What if you had a Trap Shooting book that could not only take you to the practice trap and help you to discover the flaws in your technique but showed you how to shoot trap targets with incredible precision? Wouldn't shooting be more fun with a higher score? You bet it is.

Trap Shooting Secrets will pay for itself many times over. Fact is just one win on the 25/50 handicap options more than pays for the book.

40+ illustrations placed at the back of the book for fast reference when trapshooting in competition. You'll like this!

Trap Shooting Secrets takes you into the world where professionals reside. With over 132 practice tips it's like having a shooting coach by your side. 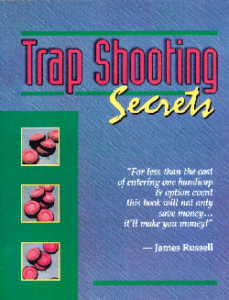 Point of impact adjustments you must make and why understanding regular hot-core patterns the pros use and others don't. Real-World shotshell selection, develop crystal clear eye focus, adapting to variant target behavior, are things you need to learn.

The secrets of swing timing

The secrets of swing timing and call timing, managing flinching, powerful slump-busting procedures, feeling the shot, proper trapshooting muzzle canting (yes, you can) learn these things. Then there is inertia busting moving gun techniques, back-sighting the sight beads, so you're not shooting with your eyes only, chokes for each yardage group to maximize your score. Finally managing nervousness and shoot off pressure, the proper methods of practicing with over 132 practice tips!

Learn how to see targets in slow-motion so you can dead-center your shots and dustball the targets. Learn the secret of slow-motion mode shooting (which is fast shooting), develop a winning mindset, understanding concentration, trigger control and much, much more to list here.

No other trapshooting book explains more details, especially for handicap long-yardage shooting where precision shooting is mandatory. Softbound 8x11 format, 170 pages, 17 chapters, over 40 illustrations. Equivalent to a 255 page, 5x8 size book! If you shoot trap, you need "Trap Shooting Secrets." Stop missing targets and start winning the option money and competition events. This book will pay for itself many times over. Satisfaction guaranteed.

Since I started shooting trap, I longed for a guidebook to tell me the tricks of the trade. I couldn't find any that genuinely explained exactly what to do. I had to learn the hard way, like everyone else and wasted a ton of money to boot. The trapshooting books I did read didn't tell me what to do. I wanted a textbook, a book to show me what I am doing wrong and help me to get it right. To my surprise, no such book existed! I spent hundreds of dollars on videotapes with the same results.

I found other shooters were too busy themselves trying to master the game to give any sound, reliable advice to bank on, and many did not know the answers to the hundreds of questions I had about this intricate game of trap shooting. Being a writer, that is when I decided to write the book myself, so I interviewed many All-American top gun shooters before writing Trap Shooting Secrets, including the ATA and PITA hall of fame shooters!

Over the years I've taken the professional shooter's advice and tips tested the principles and instructions given to ensure they did indeed work (which they did). I then passed on the tips verbally to friends to see if their scores would improve (which they did). I then had to study even deeper into the game to find a way to take an intangible subject and be able to transpose it into text. It was the most robust book I ever wrote! Now I know why there were no technical manuals on trap shooting - it's a bear of a subject to write. After years of work, interviews, testing, and re-testing, performing calculations, coaching, more meetings to clarify, and testing some more and developing interesting, yet previously unknown concepts, I finally tied up the beast and put together; Trap Shooting Secrets.

The moment the book was published letters arrived from readers who won tournament trap shoots, including the highly competitive Grand events!

Trap Shooting Secrets delivers speedy results because it fills in the missing knowledge keeping your scores down. I have found the secrets to breaking out of slumps and to end flinching once and for all. Flinching is not primarily caused by recoil as commonly thought, and, a release trigger is not the real cure (as you already know, it only helps but does not cure). The remedy is within the "internal time clock" all shooters have, yet each shooter must and can discover it to master trigger timing and control. It's easy when you know how. So if you're in a slump or flinching, Trap Shooting Secrets will bring you out of it quickly.

If you want to raise your scores, this is the book to read. I have tested the techniques, and they do work, immediately. You don't have to spend money buying a new gun or perform expensive gun modifications to bust out of flinching, slumps and poor scores. Trap Shooting Secrets does have the powerful tips to guide you into higher scores. I've covered every subject from stance, setup routines, proven gun and eye hold points to help you get on that target fast, muzzle swing dynamics and geometry, eye training, target acquisition tricks, the point of impact, shell selection, winning hot-core patterns and hundreds more tips and techniques.

If you're a serious shooter who wants to win those big State and Grand shoots, you'll need Trap Shooting Secrets to give you that edge your competitor doesn't have... personal knowledge! Secrets of trapshooting! That's what the pros have, and others don't, until now. And, there are plenty of secrets revealed in this book which explains why you currently cannot compete with the pros until you start using these inner secrets they know all so well. There are many secrets professional trap shooters use the average shooter has no idea whatsoever exist. I've performed years of research and interviews. My engineering background gave me the insight to ask the right questions, study the technical aspects of the game and formulate the answers trapshooters need to know. And age is not a factor. Many veteran shooters would shoot way better applying these easy to use techniques.

You will learn shooting techniques you never knew before. Things you've never read in any magazine or saw in any videotape. Just imagine if you had the opportunity to take private lessons from a professional trap shooter where he teaches you those intricate inside secrets. That's what you get with Trap Shooting Secrets -- personal advice and instruction beyond the normal realm of knowledge.

The choice is yours. You can read Trap Shooting Secrets and have this shooting coach by your side to crank up your scores; to bail you out when you start missing targets and tumble into a slump, or you can choose not to read the book and be satisfied with the scores you already have. If the top-notch shooting magazines and professional shooters (who teach and shoot trap for a living) including the Olympic trap shooting schools recommend shooters to buy Trap Shooting Secrets, well, it say's it all right there.